I am angry today.  My friend Paul has always been generous in his sharing and volunteering. He had lost his job and fallen on tough times.  Being a nice guy that he is, he offered to pick up the lunch tab when he called to seek my advice. Knowing his situation, of course, I couldn’t allow it.

Over a vegetarian burrito, I chewed in the meaty details of Paul’s sorry tale.  It all started a few months ago.  Soon after he knew his job was at risk, Paul was getting deeper into his faith to help him deal with financial problems.

Turning to spirituality to overcome a crisis is a healthy way to move forward in my view, but the problem is, the predatory sharks know this too.  While flipping through TV channels one Sunday morning, a televangelist caught Paul’s attention.  He appeared to be a sincere guy and talked about several personal stories of faith and healing.

He then talked about how having faith in God’s ‘abundance’ will ensure some of it flows your way to solve all your money problems.   Inspired by the sermon, Paul sent $50 to that ministry.  Little did Paul know that was only the beginning. 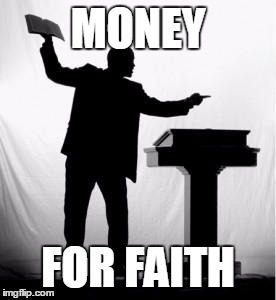 Among this category, and perhaps to capitalize on the aftermath of the Great Recession, a virulent subset of faith-based institutions emerged. They call themselves the “prosperity” church or ministry. This is the type of evangelist who openly talks about how aspiring for more income and seeking abundant wealth is not only good, but is actively encouraged by God.

This wealth-preacher goes on to say that becoming wealthy is your rightful reward for faith.   He or She also talks eloquently on TV about how money begets more money (which is not a phrase they prefer to use, calling money “prosperity” or “abundance” instead).

After acknowledging Paul’s $50 donation, the institution sent him a special, invitation-only prosperity number, which is a telephone number that Paul could call and receive the prosperity blessing directly from the evangelist.  Faithfully, Paul called that number and to his surprise, it wasn’t a toll-free number or even a long-distance number. It was a number where every minute cost him $3 (because, you know, good things come in three’s).

There was a soft-spoken female voice on the other end who was, of course, not the evangelist himself but apparently, a devout follower abundantly blessed by the TV evangelist (which I take it to mean, she was blessed to have this $10/hour ‘phone healing’ job).   Paul, who is otherwise level-headed, felt good listening to this woman about the abundance gospel.

He spoke for 18 minutes (“invested” $54 on the call) unburdening himself with this woman who handled his vulnerability so well that her voice became the ‘balm’ to his wounded emotions.   The call ended with a request for $250 to help Paul bring the abundance express into his life very quickly (there was another option for $100 but that abundance train is apparently slower – who wants to get on the slow train to prosperity?).

Truth be told, hardships can make even normally rational people act irrationally.  Paul faithfully gave his $250 donation via his credit card over the phone and genuinely felt good about the conversation he just had.  At this point, I was thinking maybe the lady should work in a far better paying – and more honorable – mainstream sales job?

Another 2 weeks pass by.  Paul gets a donation receipt for his $250 and a letter containing a crisp $1 bill stapled to it proclaiming this as the beginning of Paul’s prosperity.  Paul was thrilled until he read the back side of the letter, which urged him not to keep the $1 in his house (as it can quickly turn from a blessing to a curse!) but to return it.

Specifically, he had to return it with his donation of $500 to make it the ‘sacred’ number of $501 for Paul to be elevated to the ‘chosen circle’ of prosperity leaders.  In return, he was promised the ‘sacred ashes’ of the evangelist’s sanctified garb (which is apparently, a ‘prosperity magnet’), which he can keep in his home.   In his moment of weakness, Paul wrote a check for $500 and stapled the $1 bill to it and sent them back to the (increasingly prosperous) prosperity ministry. 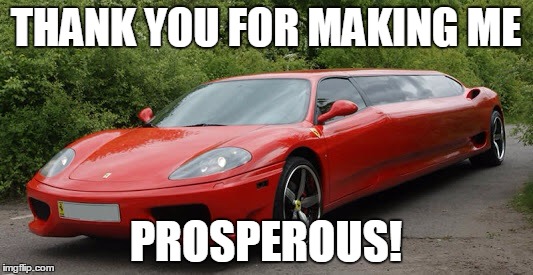 Paul had, in short order,  offered in total $904 in search of prosperity. This money could’ve sponsored many deserving poor children’s food, clothing and education.

I realize some of you may have strong views on faith-based donations but at some point, you must wonder who is this making prosperous?  Paul did receive the sacred ashes in a tiny sealed bag with strict instructions on keeping it in his wallet or carrying it on his person.

That’s when the second hammer hit.  The next day, Paul received a letter from his old employer that the severance will be less than half of what he thought it would be.  So much for abundance!

Panicked, he called me asking for my advice and narrating this sorry tale.  After lunch, I offered to help him draft a polite letter to his employer making the case for why Paul deserves a higher severance package and also seeking a meeting with a decision-maker.  I put Financial Samurai’s book to good use here. 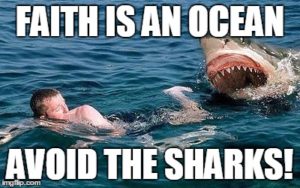 If these faith-based institutions can take advantage of an educated professional like Paul during his difficult time, imagine what they could do to average people.  These are among the real scum of society, the parasitic sharks who add no value to human progress but extract an unfair share out of the hard work of all people.

More than two decades ago, this growing threat was recognized by one of my favorite bands.   Watch this funny song to see how true their words are ringing even today:

Faith can be a wonderful thing but it is intensely personal (like meditation).  It can be a good psychological armor in your life journey. To benefit from it, you must to learn to swim peacefully in the ocean of faith, and you must avoid the sharks.