What The Retirement Crisis Means for You

Let’s face it.   Americans, and for that matter, most of the western world, are ill-prepared for their retirement.   Reading ER blogs and personal finance websites will not give you the real picture as the authors and commentators are a progressive bunch who, collectively, are better off financially than others.  The real truth, of course, is scary.  In this post, I analyze two charts from a well-researched American study to explain what this means to you and why you should care. 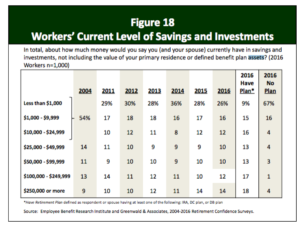 The two charts I am focusing on are from the Employee Benefit Research Institute who conducted the study.  The first chart above is telling and chilling in its presentation at the same time.  I have culled out three facts from the chart with my inference that hopefully helps you in your thinking about retirement, whenever you read about financial independence.

Fact #1:  More than half of Americans have put away less than $25,000.  This may not fund the cost of even one year of living for many of them.

Fact #2:  A massive 86% have less than $100,000 in savings.  The 14% who have saved over $100,000 are the ones most active on personal finance websites (either blogging, commenting or doing things to improve their financial condition – the ones “with a plan”).  Of course, there are those who have far less that you find on many PF blogs but they are a small minority among this 86%.  This is an encouraging sign as the more you read, the more you improve your financial situation.  One of this website aims is to add value to these eager seekers who are part of the 86%.  They are the ones in search of a plan.

Fact #3:  Of the most risky lot (those who have saved under $1,000), a large percentage of them “don’t have a plan” for their future.  They can’t cover even a small personal emergency.  This group won’t bother reading anything about personal finance, much less implement ways to improve their financial situation.   This group also includes a large contingent of people who have massive loans that they are struggling to pay off.

Most people in the groups above, if they actually use the calculator in this post, will find themselves to be an UAW.   That’s not a great place to be if you don’t have a plan.

The sad state of personal finance among the majority of working people is why government retirement programs like Social Security are critical.  Frankly, I find all the chatter on cutting social security or its equivalents in other countries simply not practical.  Even a modest cut in the pension from these programs will cause a major impact on the lives of millions of retired folks, especially all those in the 86% group above.  Clearly, a public retirement program doesn’t exist to cover only the top 14% of a society, right?

Unlike in Greece or Spain, the American social security program is relatively easy to fix as its obligations are not crippling the system.   Making the social security tax apply to all earned income without a ceiling is a simple way to ensure the program remains well-funded.  Without the assurance of Social Security, poverty is all but assured for the millions of Americans entering retirement with meager savings above.

Here on Ten Factorial Rocks (TFR), we generally try to write articles to help as many people as possible and give them the tools and insights to empower themselves for a better financial future.   The last two groups in the chart (those who saved under $10,000 and those who “don’t have a plan”) are the most vulnerable.   They are unfortunately inside a huge hole, and the first thing to do if you find yourself inside a hole, is to stop digging.

Articles about investing, safe withdrawal rates, dividends and many others are simply meaningless to this group.   The first step for them is to reach level ground (get out of all debt, other than mortgage) and put a solid foundation (build emergency savings) underneath your feet.   Only then do other topics mentioned earlier become even relevant.

When you search for the reasons behind this poor savings rate, the chart below offers answers. 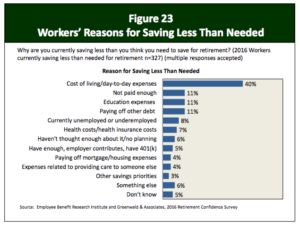 Did you notice that the top 4 reasons mentioned in the chart are related to one another?   Together, they account for 74% of all reasons cited.  Most people who cite higher cost-of-living would also agree with ‘not paid enough’ because if you were paid well, you wouldn’t worry about cost-of-living being the primary reason for not saving.  Of course, every one has to live somewhere so it doesn’t matter where you live.

It only matters whether you have anything left over after living.   Everything in this chart boils down to either living expenses or making more money.   Here on TFR, we try to focus more on the latter, while being sensible about the former.  For people who are in a financial hole, working on ways to boost their income (combined with sensible frugality while getting out of debt) is the smartest path to higher savings and a decent retirement.

There is a huge boost to savings from higher income (‘leveraged impact’ in corporate speak) as we saw in an earlier post about being flexible to relocate.   This leveraged effect is not always understood by many people.   Most people ignore the huge impact of even a 10-20% income increase on retirement savings.   What this flexibility to relocate for work also does is that its opens up your mind about relocation for a lower cost retirement as well.

These charts help keep things in perspective when you hear from some people $1 million isn’t enough.  A million dollars may not buy what it used to, but this kind of net worth puts you at the top slice of the world, aside from providing you a good retirement in most places in this wide world.   That’s worth working for.

7 comments on “What The Retirement Crisis Means for You”