Don’t think so? You may be closer than you think. Read on.

I grew up hating the rich because, in my idealistic younger days, they represented the anti-thesis of equal opportunity and egalitarianism.  I heard stories from my parents about people who used their government connections to score sweetheart business deals, dodged their taxes, and were slave-drivers to the poor people they employed and who they treated like human waste.  My parents used this example to steer me away from business ownership and towards ‘respectable’ professions in science, engineering and management, where you can have a good life and decent income without having to be at either of the extremes in wealth.

Consequently, I wanted ‘normal’ friends who I could hangout with along a roadside ice-cream truck after a hard-fought little league game, and where I could throw small pebbles into a little creek nearby. I hated even the idea of a rich kid who had servants to order around and run whatever errands that the prince’s whims demand.   My admittedly biased notion of an arrogant SOB filthy rich kid (“Is there another kind?”, I used to wonder) did not go away till I later made friends with children of several well-off families.  My outlook changed.

These new friends proved that good kids can also come from rich homes.  My real understanding of the 1% started then.  Finally, what sealed it for me was cute little Macaulay Culkin as the good kid of Richie Rich.

Given this background, when I read Credit Suisse’s recent report, I found out ironically that I am part of the global top 1% in wealth. Holy smokes, how did that happen? No inheritance, no stock option riches, no top-level connections and as far from Wall Street as you can imagine – just a regular guy is now part of 1%?!

More than 100 million Americans are among the top 10% rich in the world!  It’s no surprise then why our country is considered the world’s richest and why Warren Buffett says he won the biological lottery to be born in the U.S.

Here is the funny thing.  I never consider myself a 1%-er.  Even in my Rockstar Finance-featured article talking about the life of a 1%er, I reported being an apprentice to a real 1%er, a top honcho who I had the privilege to work for.

Even if you are not part of the global 1%, I bet a large number of personal finance bloggers and their regular readers out there are part of the top 10%.   You only need to own about a third of a median house in the U.S and with zero dollars in your bank or retirement accounts to qualify among the global top 10%.

The real data about global wealth should tell you a few things straight away:

The last point is a cause for much concern in the world.  The top 10% of the world own an astonishing 89% of the total global assets.  Of course, much of that is concentrated in the top 0.5% and even more in the top 0.1%.   The 0.5-1.0% folks (the ‘bottom half’ of the 1%) would be professionals like me and other FIRE bloggers like Financial Samurai, Green Swan, the legendary MMM and Jim Collins, Physician on FIRE, the Canadian revolutionaries, Full Time Finance, Mr. Tako, Chad, the families of 1500, Joe and RoG etc. who are all living a ‘normal’ life (as each of us define it) while earning a decent professional (or passive) income, and all have reached this stage after investing their savings efficiently.

Some of us also worry about same issues like what is enough and portfolio longevity.  So, don’t hate the 0.5-1%!   The 1% group is extremely steep in wealth.  It’s almost as if the top 0.5% are from another planet compared to the next 0.5%.   Also, the bottom half (of the top 1%) are the folks who help the top 0.5% very rich people stay there.  After all, the uber-rich need smart engineers, lawyers, scientists and accountants working for them. 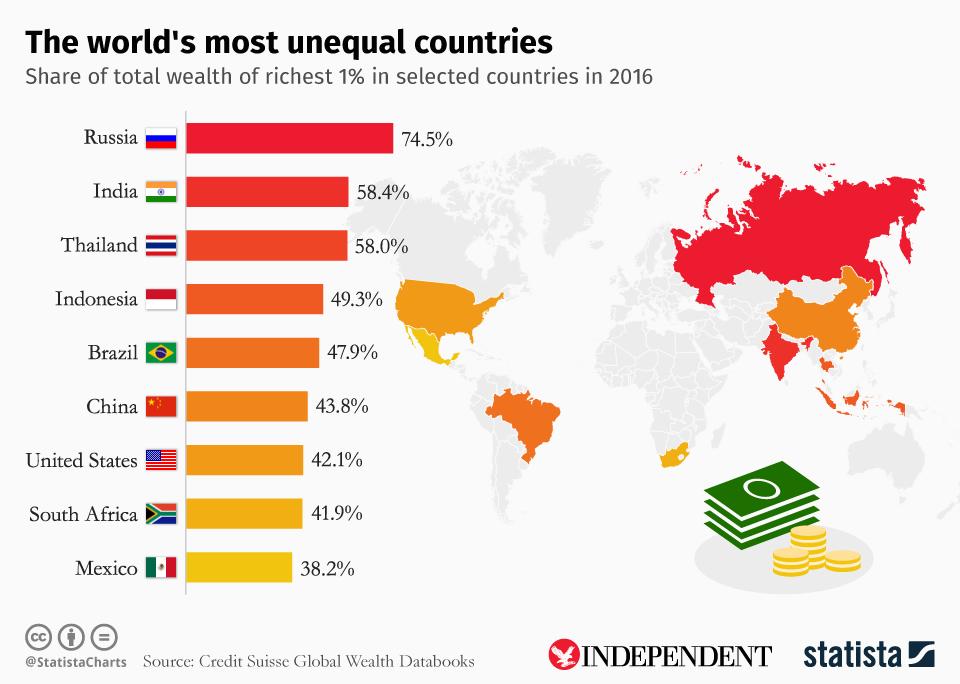 Russia, India and Thailand are glaring examples of where the top 1% own more than half the total national wealth.   Generally, the poorer a country’s per-capita GDP, higher the proportion of assets held by the top 1%.   This is largely because of the reasons I started out this article with.  Nepotism/cronyism, regulatory monopoly, relatively high cost of capital that stifles innovation, massive bureaucracy, and regulations to discourage new players – all together constitute a ‘cozy club’ for the entrenched elite in those countries.  Other countries aren’t far behind.

It’s hard to put a precise number on how much assets should the top 1% own for a country to still work for the other 99%.  Looking at societies that are perceived to be less unequal than others, I would guess that figure to be 25%.   So, if the top 1% of wealthy people in a country own no more than a quarter of the country’s wealth, then I would guess that people would be relatively happier and more trusting of the country’s institutions and political system.   Clearly, there is a very long way to go for the world’s largest countries to get there.

Until then, you can rejoice that you are part of the top 1% or top 10%.  Or, at the very least, you have been given an opportunity to get there.  If all this riles you up, well…take a number and get in line.  That’s what I did two decades ago. 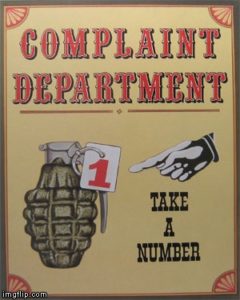